They are preserving American motoring history for future generations.

Please show your gratitude by leaving a kind comment and sharing the page with your friends.

A Brief History of this 1966 Pontiac Grand Prix 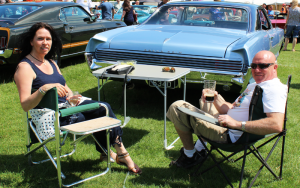 Some of you may know Geoff from his TT sidecar racing days.

Is this your first Yank?

This is my 84th American car, my first was an olds Toronado in1980.

When did you buy it?

I have had the joy of ownership for 18 months.

What state is the car from?

She originates from Wisconsin.

How many owners has she had?

With just 3 owners before me she has been cherished to this very day, she is a memory builder and she gives and gives.

Any story behind the car?

The previous owner was an English guy who toured Canada and the USA.  He left the car with his sister in Wisconsin between tours. He then shipped the car to the UK and subsequently toured in Europe. Geoff purchased the car just after the European tour.

What engine has she got?

I have sourced and restored a Set of 6 pack (3×2 barrel carbs) known as ” Tri-power” Hi Po option for a 60 HP boost this coming winter.

She drives like a dream, smooth, fast and with such a torquey lift at any speed, with a chocolate and cream V8 burble, mmm, those who know will understand (we are blessed).

The GTO look in a full size car is awesome boot the boulevard, low drag strip, fast, cool and classy, pillarless line is so pretty.

What Shows do you go to?

I show it where and when and I Know this is the one, the king, the mighty ” Tin Indian!”.

Some more about the 1966 Pontiac Grand Prix

Grand Prix proved itself a classic the day it was introduced four years ago. And since then, many cars have tried to follow in its Wide-Track. Let them try.

The sixties was a time of rebellion and change. Youth became more affluent, politics more turbulent and drugs and music became more influential than the politicians.

In 1966 the Vietnam war was at full tilt with 250,000 troops there by June, Ken Kesey was bringing experimentation with LSD to the fore with his ‘Acid tests’ and US astronauts were blazing a trail in the space race.

While American youth protested against the war John Lennon was causing his own riots with his “We’re more popular than Jesus” quote.

The sixties truly was a turbulent time and most of the auto manufacturers were taking note by introducing compact lines that appealed more to the new social conscience.

However, full-size designs still pulled at the heart  strings of many American drivers and in this department Pontiac over delivered.

The 66 Grand Prix with its 389 ci (6.4 Litre) v8 engine was the perfect solution for those ignoring the increasing shift towards compacts and smaller bodied muscle cars.

Four out of five homes owned a car as average earnings per head soared and in 1966 the industry churned out 9 million cars.

Sadly, Studebaker breathed its last but Pontiac turned 40 and became the third most productive car manufacturer behind Ford and Chevrolet. 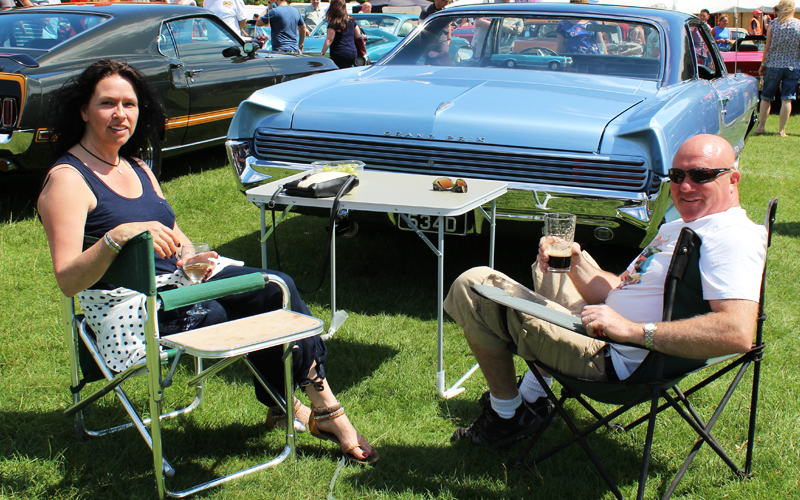 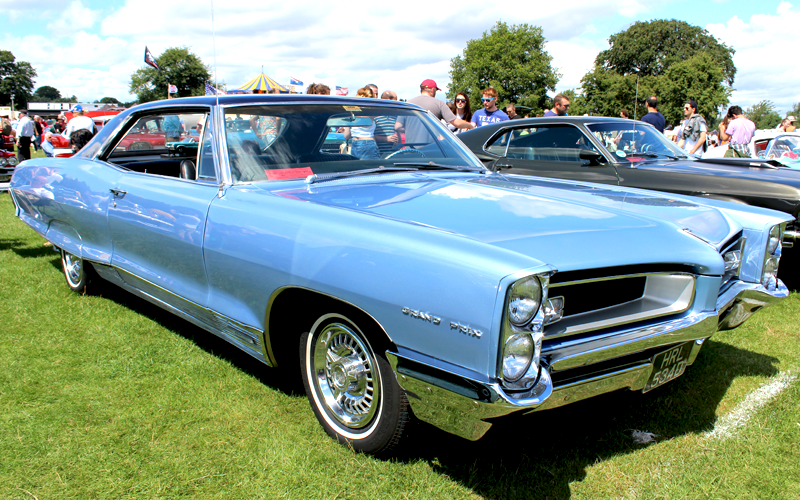 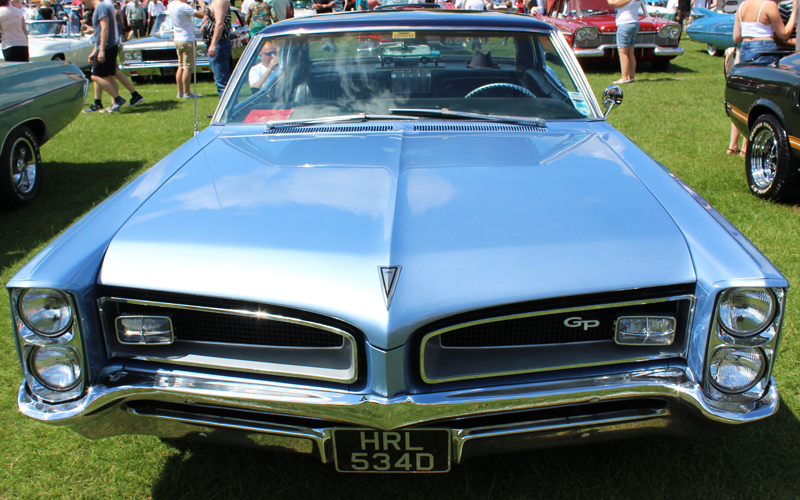 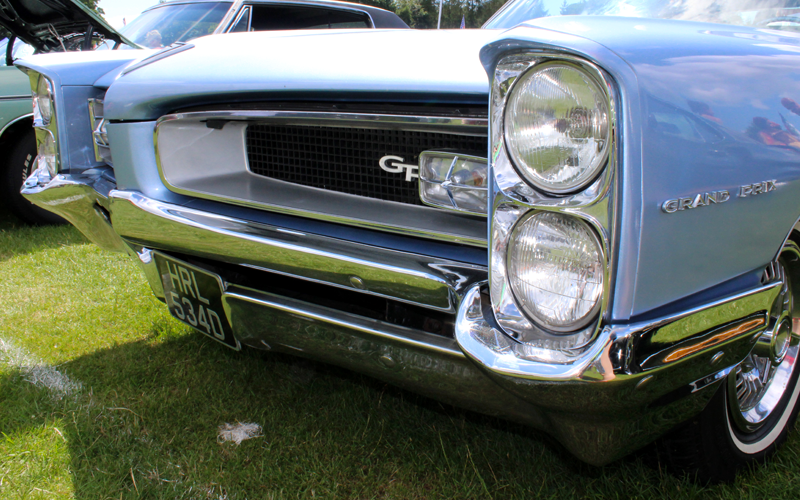 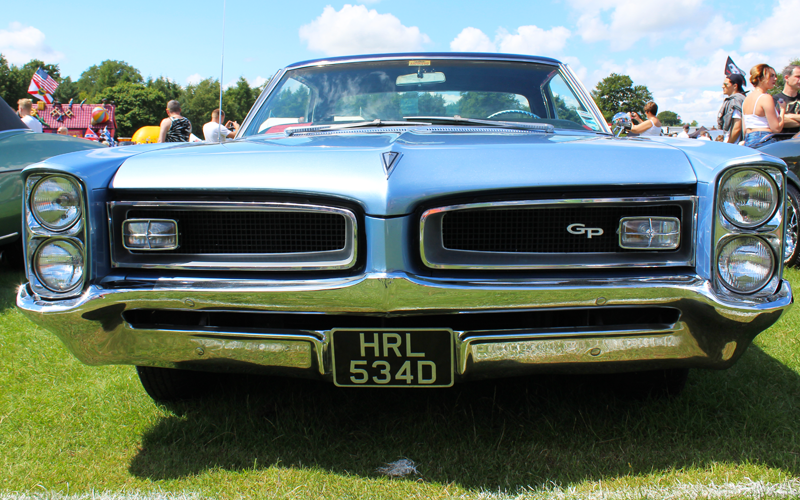 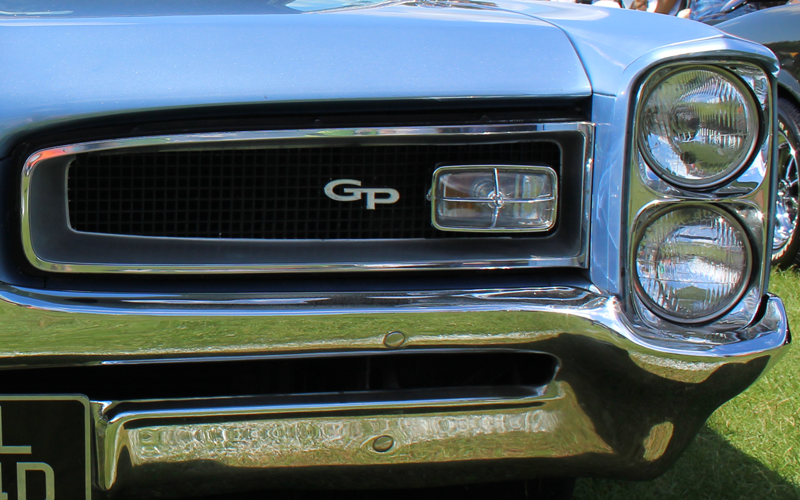 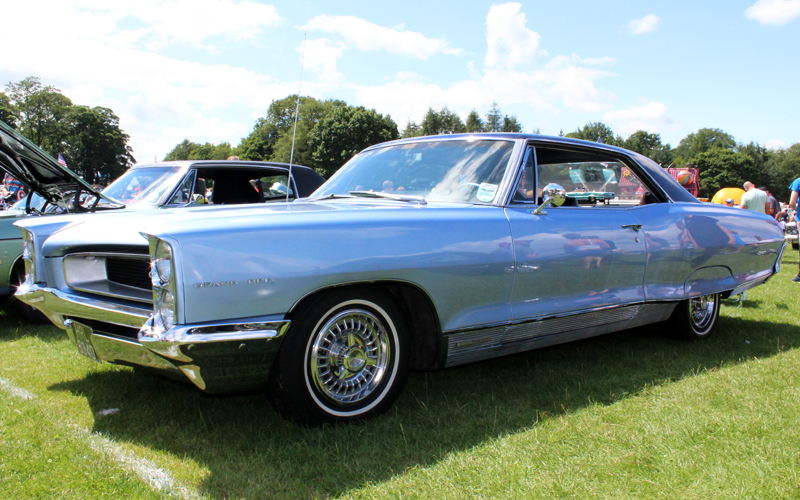 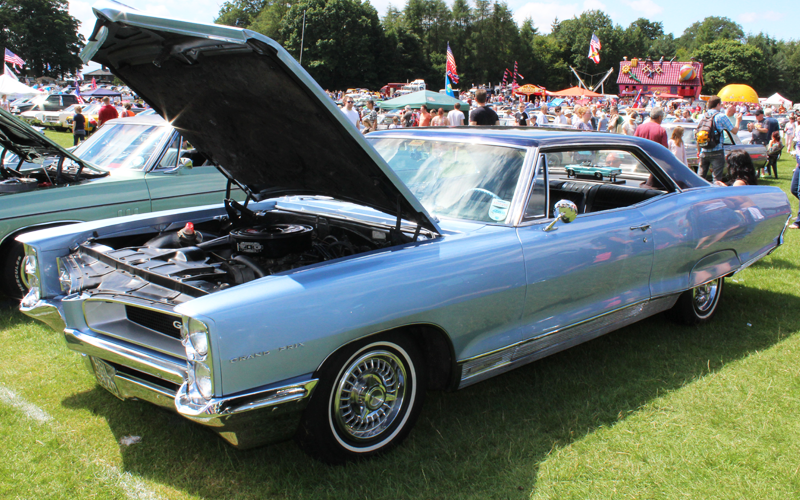 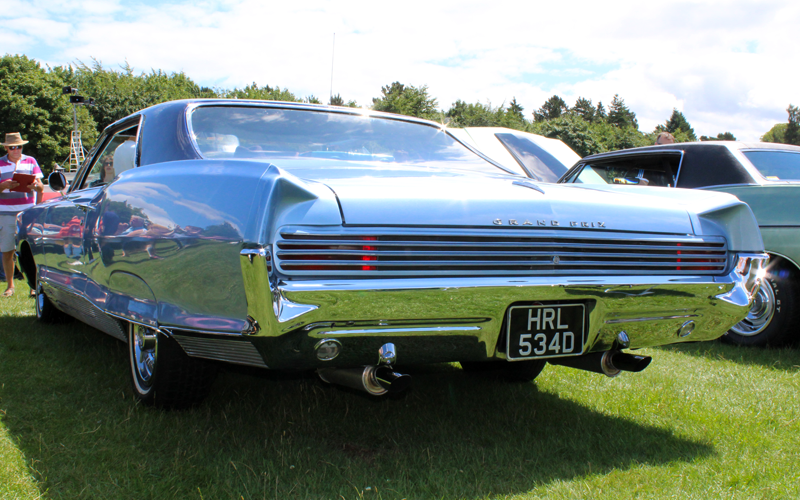 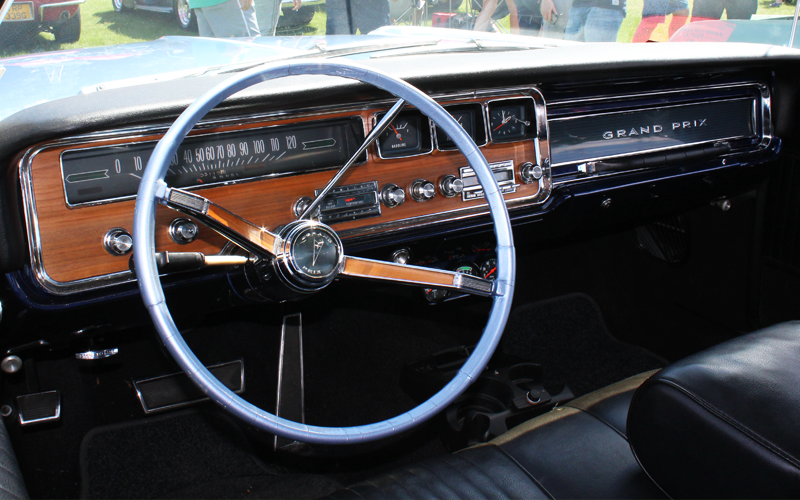 Movies and T.V. shows that the 1966 Pontiac Grand Prix has appeared in

The Grand Prix hasn’t starred in any movies or shows but could be seen in the backdrop of shows like Kojak, Man from U.N.C.L.E and movies like the French Connection and Mean Streets.

These brief appearances might seem insignificant but as many readers will agree, staring into the background of shows like these as a kid was the only way to get a glimpse of what cars were on offer over the pond.

It was where a passion for these cars for many was born.

And those memories of shiny, super-size, sparkling tin dream machines floating along the wide streets of the USA still inspire purchases today. 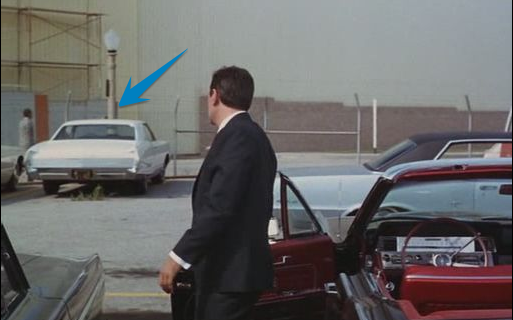 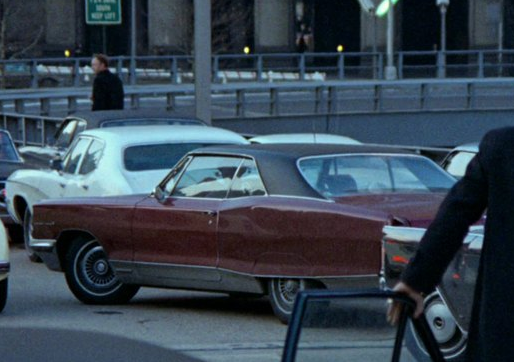 Nice angle in the French Connection (1971) 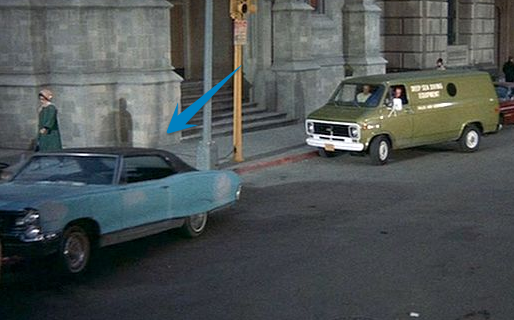 All images courtesy of IMCDB (vehicles in T.V. and movies database)

We couldn’t include all makes so if Plymouth or Dodge is your choice then go for Chrysler! 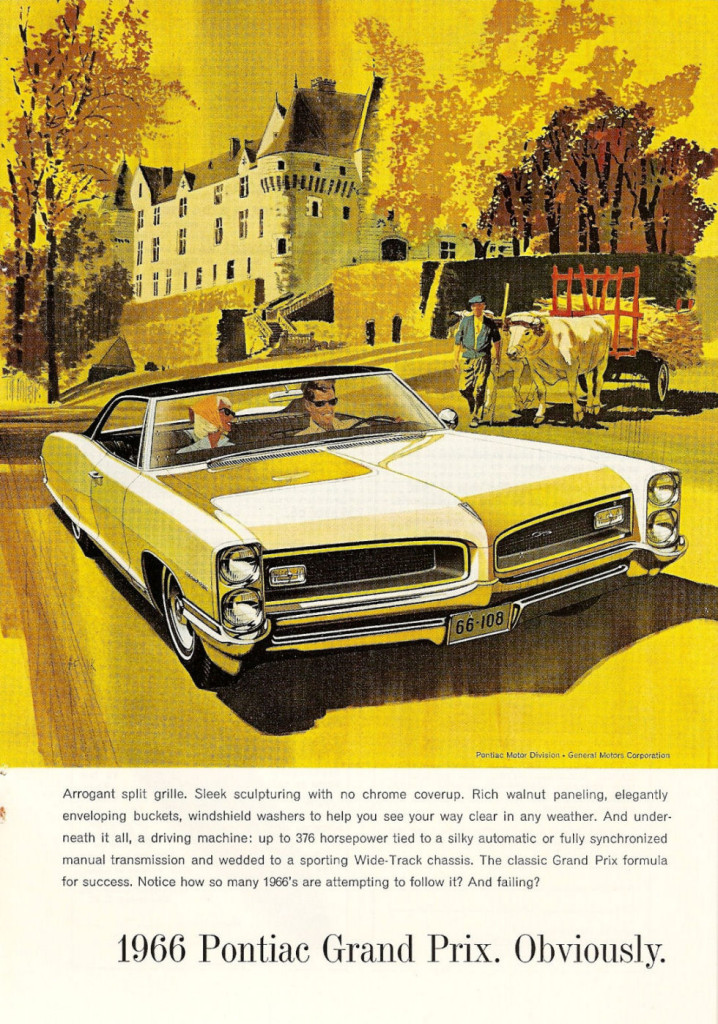 Images courtesy of Old Car Advertising and Fitz and Van

Pontiac Artwork by Fitz and Van

The land yachts of the sixties remind us of a time when the car was more than just an A to B machine.

Their sheer size oozes superiority, their low slung, wide track design gives them a laid back but menacing look.

The likes of Napoleon Solo, Our Man Flint or the Green Hornet slipping into the bucket seat of one of these glamorous sixties machines spawned in me a deep longing to see one for real never mind own one.

Thankfully due to the dedication of people like Geoff Smale, we can still enjoy a chapter of motoring history that will never be repeated.

And don’t forget to share this with your friends or leave compliment in the comments below.